Birth of river Kaveri: Let us start with knowing little more about river Kaveri. In ancient times, there was a sage named Kavera. He was performing penances for spiritual advancement in Himalayan mountains. Pleased by his efforts, Lord Brahma, the secondary creator of the universe, appeared before him and relayed a message given to him by Lord Vishnu. Lord Brahma told sage Kavera that Kavera will have a daughter who will be none other than Vishnumaya, Lord Brahma's own daughter. She will expand herself in two forms. In one form, she will flow as a holy river and in other form she will become famous as Lopamudra. Because of having such an extraordinary daughter, who will be able to purify even the greatest sinners, Kavera will become totally purified and attain the lotus feet of Lord. In due coarse of time, a daughter was born to sage Kavera and was thus named as a Kaveri.

Kaveri comes to south India: When Kaveri attained proper age, Lord Brahma instructed sage Agastya to approach sage Kavera and ask his daughter Kaveri in marriage. When Agastya approached sage Kavera, Kavera accepted the proposal of marriage between Kaveri and Agastya. Before marriage, Kaveri divided herself into two parts. By one part, she entered the earthen pot of sage Agastya in the form of water, and by second part she appeared as lady Lopamudra. Then the marriage ceremony of sage Agastya and Lopamudra was performed by the assembly of demigods. In due coarse of time, sage Agastya came to south India along with his wife. He also took with him the water form of Kaveri in his earthen pot.

Appearance of Lord Ranganath: River Ganga is considered the holiest river of all the rivers as she directly touches the feet of Lord Vishnu. River Yamuna is considered the most fortunate because of her intimate association with Lord Krishna. Both these rivers as well as most of the places where Lord performed His activities are in North India. River Kaveri is situated in South India, quite away from these places. River Kaveri also wanted to have the intimate association of Lord like other fortunate rivers. Therefore, in order to please Lord, river Kaveri performed severe austerities in the area of Srirangapatna. When Lord Vishnu was pleased by the austerities of Kaveri, He appeared before her and blessed her with benedictions. Lord Vishnu was so pleased with Kaveri that He gave her the status of the holiest river. He also told her that Srirangapatna will become the holy place and He Himself will take residence in Srirangapatna to reside in Kaveri's lap. Kaveri was thus immensely blessed by Lord Vishnu. Then Lord manifested His deity on the island of Srirangapatna in a secret location. How Lord arranged for His deity to be found is another interesting historical account.

Lord Ranganath found: By Lord's arrangement, once there was a great famine in the country. Most of the water resources were exhausted and different hermitages of sages became devoid of all the natural resources like water, fruits, milk and grains. Therefore sages who were living in those hermitages had to leave in search of water. These sages  arrived at the banks of river Godavari and saw a beautiful hermitage of sage Gautama. Sage Gautama happily welcomed all the sages. For making proper arrangements to fulfil the daily requirements of the sages, sage Gautama planted large amount of fields and plants to produce grains, fruits etc. along the banks of Godavari. Seeing the extraordinary opulence of Gautama's hermitage as well as it's serene setting, the visiting sages became envious and the thought of taking possession of this hermitage by driving out sage Gautama took hold in their minds. On one fine morning, all these visiting sages conspired to fulfil their desire and produced a mystic cow which started grazing in the fields planted by Gautama. When Gautama saw this cow destroying all the crops, he instructed his disciples to drive the cow out of the fields. When the disciples started chasing the cow, the cow mysteriously ran towards sage Gautama and fell dead at his feet. All the visiting sages then accused Gautama of killing the cow, which is one of the greatest of the sins (killing a cow is considered equal to killing one's own mother). The visiting sages asked Gautama to immediately leave the hermitage and go on a pilgrimage to purify himself of the sin of killing a cow.

Sage Gautama was extremely disturbed by these happenings. By his mystic powers, he realized the plot conspired by the cruel sages. Gautama cursed these unqualified sages that they will become averse to Vedic teachings. After cursing them, Gautama left his hermitage and went on a pilgrimage. During the course of his pilgrimage, he reached Srirangam in Tamilnadu and started worshipping Lord Ranganath who is residing there (this deity of Lord Ranganath is also self manifested). There Lord Ranganath appeared before Gautama and told him that in Srirangam He is being worshipped by Vibhishana, Ravana's younger brother. Lord told Gautama that He has already manifested Himself on the island of Srirangapatna in a secret location and instructed him to proceed towards Srirangapatna.

On receiving this instruction, Gautama came and established his hermitage in Srirangapatna. One day, when Gautama was teaching his disciples about the history of Srirangapatna, other great sages like Parashara, Bodhayana, Yajnavalkya, Atri, Kanva, Shuka also came to his hermitage. Gautama was overjoyed by their arrival. All these sages organized a grand Vedic sacrificial ceremony for the satisfaction of Lord Ranganath. When the ceremony was successfully completed, Lord Ranganath personally appeared before the sages and revealed the location of the deity of Lord. The huge deity of Lord Ranganath was to be found in the dense Tulasi forest under a particular anthill. After this great revelation, sages headed by Gautama entered the Tulasi groove and found the anthill. Gautama then summoned the different demigods, who descended there from their heavenly realms. They had brought a celestial cow called Kamadhenu with them. Sages then poured the milk of Kamadhenu on the anthill. When anthill was thus dissolved, a huge and beautiful deity of Lord Ranganath emerged. Lord was lying on the bed of huge five hooded serpent called Anantashesh. Lord was peacefully lying in a meditative trance. The feet of Lord were placed in the lap of Kaveri who was serving Lord's feet.

The temple: The temple of Lord Ranganath is very beautiful and spacious. It houses the deity of Lord Ranganath as well as Lakshmi Devi (Ranganayaki). There are other beautiful deities of Lord Narasimha, Garuda and Venugopal. The original shrine is established by sage Gautama. Later many great kings and administrators have added and expanded the temple over the period of many centuries. In the 11 century AD, the king of Karnataka, formerly known as Bitti Deva, became disciple of Ramanujacharya and later became famous as king Vishnuvardhana. He made valuable contributions towards expanding and reinforcing the temple, its walls as well as the fort surrounding the temple. Later Muslim rulers took possession of the temple and made many valuable donations towards the temple. Especially king Hyder Ali, father of Tipu Sultan, was a devotee of Lord Ranganath and made many valuable additions to the temple.

Our Pilgrimage: After one independent but failed attempt of visiting Srirangapatna, this time Lord Ranganath allowed me to see Him along with the devotees of Lord connected with Bhaktivedanta Institute as well as  28 scholars of Indian Institute of Science, Bangalore. We left Bangalore in the morning 7:00 am and reached Srirangapatna around 12:00 noon. We visited Aprameya Swami temple in Mallur on the way. After having a beautiful  darshan of Lord Ranganath, mother Ranganayaki as well as other deities in the temple, I felt a spiritual bliss in my heart. My happiness was further enhanced when we went to Gosai Ghat on the banks of Kaveri. The divine atmosphere in the Srirangapatna town and the natural beauty surrounding it is a unique combination. The crystal clear, tasty and soothing waters of Kaveri is something which gives complete satisfaction to the heart. We sang Lord's holy names on the banks of Kaveri. We also witnessed a beautiful dance performed by a peacock on one of the small islands formed in the river. This pilgrimage gave me opportunity to develop friendship with many people who were new to me. At 5:00 pm in the evening, we started our return journey. Thoughout the journey we played games based on the scriptures like Ramayana and Mahabharata. It is one of the pilgrimages which I will remember for a very long time.

Lesson in atmospheric sciences: It is very much clear from the history of river Kaveri that the present state of atmospheric and oceanic sciences does not completely describe the origin of rivers, especially a holy river like Kaveri. From Vedic scriptures, we understand that there is a presiding deity behind each and every river. Moreover, as we learned, the coarse taken by the river is not randomly decided. In case of Kaveri, the coarse of the river was suggested by sage Agastya and followed as such by Kaveri. From the history related above, we can conclude that the atmospheric and geographic events are not random or just due to the changes in pressure and temperature. They are conducted under the control of powerful sages and celestial beings working under the direction of Supreme Lord.

I feel that Lord Ranganath as well as river Kaveri are the blessings which are not deserved by the Kaliyuga people like us. They are still available for our purification due to the unlimited mercy of Lord Ranganath and His devotees. I pray to Lord Ranganath for giving me ability to somehow remember His beautiful form.

I am not supposed to be a person who should be writing this article because I have no sufficient qualification for this task. I am daring to do this anyway just so that somehow my mind will be engaged in the thoughts about Lord and his great devotees. I seek forgiveness from the readers for the mistakes or imperfections present in this essay. I offer this essay as a gift at the feet of merciful devotees of Lord. I request them to pass on this gift to the feet of Lord because I cannot do so directly. 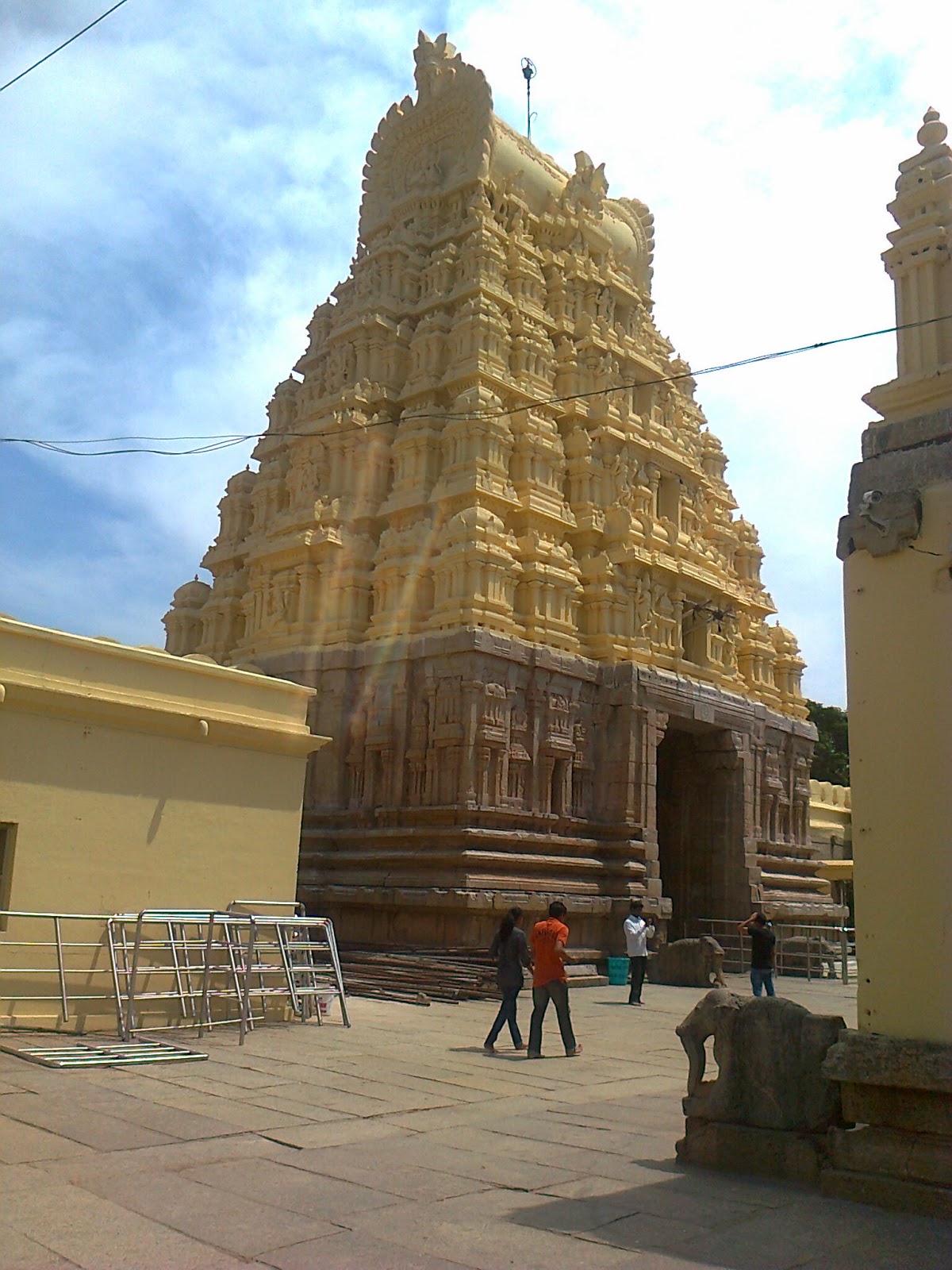 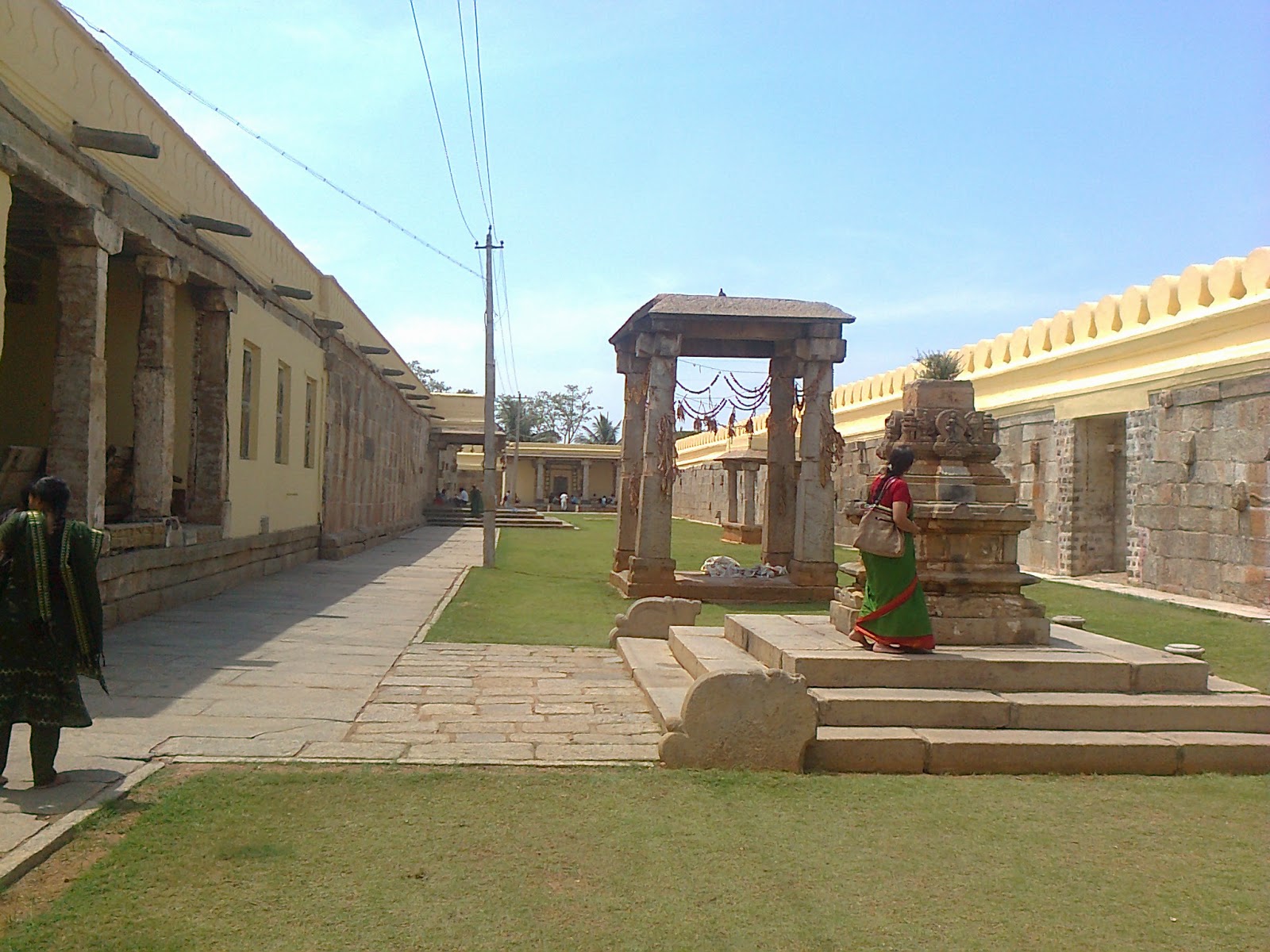 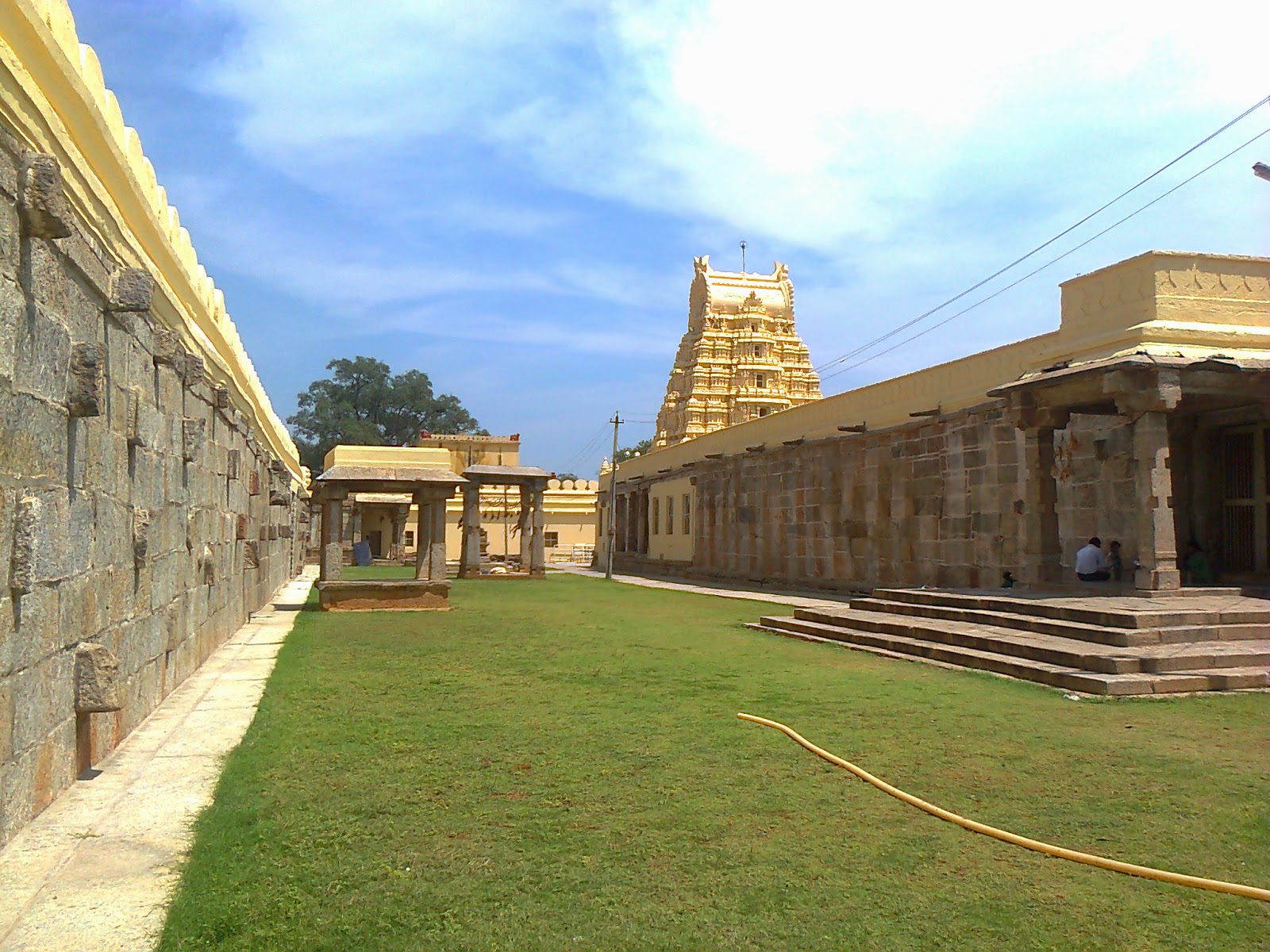 Posted by Hrishikesh at 1:24 PM